T is with a mixture of elation and of growing bleakness that I record the recent days and weeks since last I wrote. A small package arrived the evening before last from England, and sustained little damage to my pleasure considering the last item I received, and I was most surprised to see it from the Doctor, as I had expected only a package from England would be sent by the hands of my Mama, Papa or dear Kathryn. Indeed, though, it was a small collection of belated gifts for Christmas from the dear Doctor, and I could not have been more pleased with them, along with the sweet note enclosed. He was kind and generous enough to send to me a new wax seal with a beautiful W upon it, which makes a fine statement imprinted upon the red wax; a lovely little novel I have not yet read called ‘Pamela’, and nestled away in protective layers of tissue paper and confined in a small box was a beautiful locket with his portrait in miniature affixed to the front on an oval of fine ivory. It is a most faithful depiction of the Doctor, and does immense justice to the features which I have grown so fond of. My heart leapt within my breast upon relieving it completely from its paper wrapping, and I forgot entirely that Mr. and Mrs. Hegwood were present with me in the room. 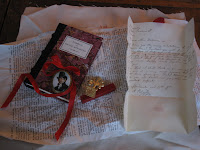 “My dear, show us what else the Doctor has sent, whatever it is has a fine look from the back, but I see that the front is where the interest lies. Do turn it about so we may also gawk at it!” Exclaimed Mrs. Hegwood good-naturedly, jostling me out of my reverie, and also reminding me gently to close my mouth, which from the moment of seeing the locket hung open in a most indelicate expression of astonishment. I placed the locket in her outstretched hand and she immediately crooned and lavished the trinket with praise and admiration. Mr. Hegwood gave a warm smile and heartfelt nod of appreciation and winked in my direction with a gentle pat of my hand. I have since affixed it with a thin black ribbon around my neck and pinned it to the front of my dress so that it would find no harm swinging from my neck as I moved about the house. At each glance since, Mrs. Hegwood has exchanged her opinion between adoration of it and chastisement of it coming with no “promise”. Each time her mind waxes pleased upon the item, she regales me with tales of how Mr. Hegwood presented such a similar gift to her, and shows me the well-loved and worn portrait. Mr. Hegwood was a fine handsome young man with a straight back and strong features when he sat for the painting, and it breaks my heart to see him in the state he is now. 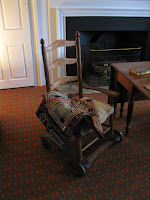 My dear, poor Mr. Hegwood has found himself in a steady decline since late October, as the weather slowly began to cool. When winter set its claws in for good and the snow began to fall readily and thick, he was taken drastically ill. He attempted to make himself rather scarce as to not frighten or vex Mrs. Hegwood, though he may have considered himself clever, he was no match for his wife’s cunning. She found him out almost immediately, and Doctor Jackson, the Hegwood’s personal man, was sent for directly. Mrs. Hegwood and I waited in no small amount of agitation all the morning whilst Dr Jackson saw to Mr. Hegwood’s care. Since then, Dr. Jackson has made himself quite at home in our guest quarters four days out of the seven, but Mr. Hegwood has shown no improvement. It does my heart much damage to watch him decline so, and his complaints of pain in his legs and back have grown more frequent and sincere, and his appetite has all but vanished in his melancholy state. I have found Mrs. Hegwood’s constant bemoaning of her dear husbands state, and the state of her and I should he die, straining on the little courage I have left. But a brave face I have kept on and I have dutifully seen to dear Mr. Hegwood every day, and kept him warm company, as he has lain unable to move from his bed. On days where the weather is not as bitter, and some sun peeks through the tenacious clouds, with the assistance of his personal man-servant and two or three footmen, he is able to be removed from his bed and placed into his wheeled chair with plenty of wrappers and warm garments, but is confined to the upstairs parlor and rooms, as he cannot yet traverse the steps. I play for him on the days that he is able to be removed from his bed, and it seems to warm his spirits as much as they can be, for the oppressive gray of the winter days is beginning to take its toll on the entire house.

I have written to the Doctor upon receipt of my gifts, and have made mention of Mr. Hegwoods current condition, in hopes that he has a suggestion better suited to care for him than what Dr. Jackson has done. I have also had mind to write to Dr. Allison in Tennessee, who my dear Doctor has mentioned more than once being a wholly competent and able physician. I will touch upon the subject with Mrs. Hegwood at supper and gain her opinion on the idea. I cannot suspect she will be disinclined to ask for a second opinion, as I see from her no amount of appreciation for Dr. Jackson, who I have caught sleeping in Mr. Hegwood’s favorite chair when he should be attending to Mr. Hegwood's ever-growing complaints of pain on more than one event. 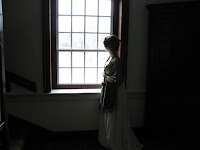 A subject which has distracted me as much as it can from the fate of my dear Mr. Hegwood, is the knowledge that the 16th of January has come and gone, and I suspect the Doctor is making his way back to America at this very moment. Other than the quick note enclosed in my package, I have heard nothing of his time in England. I made mention to Georgiana about his being in England, but it seems her dear husband Thomas missed the Doctor by just a few days on his last trip to London. I have put her mind at ease, informing her of the Doctor’s delay, but that he was safe and sound as the package signifies, though with the time taken in the mail between England and America, I fear it was a superfluous action, but I find it always best to keep everyone informed, where I can. I very much look forward to the dear Doctor’s return, and have counted down the days again, and have spent much time beside my globe, tracing my fingers over the path Mr. Hegwood placed the first time, before he was confined to his bed, and memorizing his kind face in the miniature that is always by my side or on my person.


My greatest wish is that all those I care for will make it through this winter unscathed, happy, and healthy so that we may pass the warm and pleasant months all together and in the joy of the season.

N the bustle and festive spirit of the season, I fear my diary has lain beside my bed almost entirely forgot, gathering dust instead of memories. Between the balls, feasts, and parties large and small, I have found little time or energy to encourage myself to write. The winter season in New York is a bitingly cold but beautifully white season though with an equal amount of warmth and joy to combat the conditions out of doors. Mrs. Hegwood has proved herself most adept and enthusiastic at providing for anyone in her household elaborate and very rich meals, sparing no expense on various types treats and delicacies, whether guests are involved or it is just out small familial gathering of three, and of guests there has been no shortage of; at any given day and time. I have had not a single moment to experience any melancholy feelings, and my smiles have come more readily, and given freely. Even the Vincents have had little success in irritating or exasperating me. 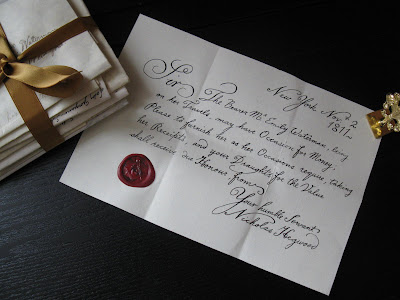 Mr. Vincent at either his good and generous spirit or the idea given by my dear Aunt, has given to me a most agreeable gift; a letter of credit for me to use at whatever I may desire; as I do not carry money upon my person for fear of danger. I have used it only at five separate merchants in town for only the direst of necessities, which are as follows:

There are other things I wish to purchase, but upon reviewing the receipts given to Mr. Hegwood, he has advised that I allow myself some time to enjoy the things that I have already purchased before adding to the collection, which is a wisdom that I suppose I cannot argue. 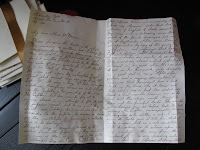 Christmas day is fast approaching, and I have been given the most precious gift asked for. A letter arrived from the Doctor yesterday, sent to my surprised whilst he was still at sea. He reports to me the most exciting of events! A British Royal Navy ship overtook them, just as he suspected and I feared. It seems that had not the Captain of the Jupiter been in some pain of a bad tooth, the outcome of the Doctor and the rest of the crew’s fate could have ended very differently. As it was the Doctor was cunning enough to barter the freedom and safety of the crew for his skills in aiding the Captain in his distress, and in the end the crew and passengers of the Constant were allowed safe continuation onto England unmolested. I worry still for his safety, as of course I shall until I know he is safe in England at last, but I can guess he may very well be on land as we speak, and I hope that he finds himself comfortable and warm, surrounded by those he cares about and those who care about him. Sadly, it seems the Phoebe, the ship in which his letter was sent back on did not take the particular care in which I’m sure he wished, sustained some water damage on the back and front, but the inside remained mostly unmarred. 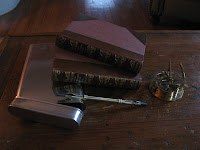 Mr. Hegwood has not received the receipts as of yet, but I have also used my letter of credit to purchase for the Doctor a few small gifts that I hope he will be able to make use of and be amused by; A small charming sextant for his travels, two books on Flora for when he is in the field researching all manners of life, and a lovely pencil, which he may use to sketch his new findings, as I have not seen him carry one before (I suspect he may have lost it). I do not think that dear Mr. Hegwood will chastise me for these selfless purchases for one which we both share a warm affection for, in each of our ways. I will send them out when they arrive at the Estate, for there were too many packages for me to carry home, and I ordered them delivered at their earliest convenience. I hope that no damage or ill will come to them; and worry for them if the Doctor’s letter is any indication of the treatment mail is given during these somewhat turbulent times between England and America.

Written by E. Waterman No comments: